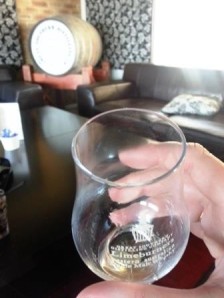 Good girls don't…hahaha…even saying that line in the video had me cracking up. Good girls can get away with drinking whatever they like and they make it look good, too.

For those who don't know, I spend a fair bit of time doing background research for all of my books, down to drinking whatever the characters do. In Water and Fire, it's Limeburner's Single Malt Whisky, from the only whisky distillery in Western Australia, the Great Southern Distilling Company. It's in Albany, five hours' drive south of Perth, but that's where the book's set, so I did the driving and spent some time down there. Did I get a lot of research done? Hell yes. Did I drink a lot, too? Well…

I made my way from my accommodation to the Great Southern Distilling Company and waited to do a tasting.

Now, the funny thing is that the blokes in the group in front of me were eager and ready, while the women kind of hung back when the cellar door manager asked, “So, do you like single malt whisky?”

The screwed-up noses as the women mumbled their negative answers said it all. “No, I don't like whisky much,” one woman admitted.

The cellar door manager…well, she just smiled as she poured tasting glasses for the blokes. It took a few seconds of sipping before one bloke said, “Ohhh…you should have a taste, love.”

His reluctant love took a taste of the amber fluid in his glass.

Fifteen minutes later, they bought a lovely bottle of single malt whisky at her insistence and headed for the couches to wait for the meal they'd ordered.

Yeah, when cheap whisky costs $20 or $30 a bottle and that's all you've ever had…it's quite a difference to taste the real stuff, traditionally distilled.

I was lucky enough to get a private tour of the Great Southern Distilling Company's distillery…and a tasting afterward.

So yes, now I know more than my characters – I know how their award-winning whisky is made. If you'd like to know, too…that's what's in the little video I put together below.

Water and Fire is available from Amazon, Apple, Barnes and Noble, Diesel, Kobo and Smashwords.