I’ll Do Whatever It Takes

I’ll Do Whatever It Takes 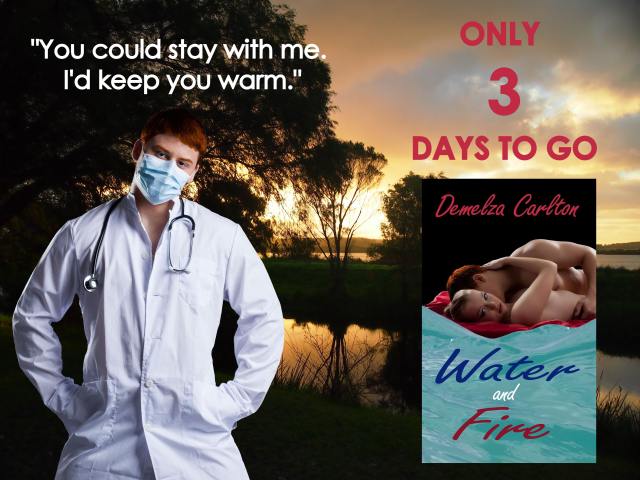 Water and Fire will be released in paperback on 16th November – only three days to go. So, I thought I'd give you a little taste of what's inside:

A screech and a thump were my only whisper of warning.

I sighed. Another suicide.

I rounded the corner. The humped body of the big buck kangaroo sprawled like a sleeping seal by the side of the road. No other animal has a death-wish quite like a kamikaze kangaroo. The bitumen glittered in my headlights, as if frosted over in preparation for the dawn. The crunch beneath my tyres belied the thought of ice. I knew the sound of crushed glass.

The tail-lights of the tiny Toyota bled their glow onto the gravel beneath. The tree toppled between those two red eyes had folded the roof into a pair of ominous knitted eyebrows.

I slowed to a stop in the gravel behind it, hoping my help wouldn't be necessary. I left my headlights on to illuminate the wrecked hatchback. “Hello?” I called.

The answering groan was deep and came from the car. I peered through the back window, but the inflated airbags inside made it hard to see. I approached the driver's door.

“Are you okay?” I asked, knowing the answer already as I surveyed the damage done by both the kangaroo and the tree the driver had blindly swerved into.

Her door had popped partly open, so it wasn't difficult to pull on the handle to widen the gap. The airbag sprouting from her steering wheel pinned her to the seat. Under the weight of the fallen tree, both the roof and the console tightened into a cage around the airbag, making her car a padded cell in which she started to panic. She struggled to twist out of her seat, but she couldn't.

I waited a moment, before asking, “Can you undo your seat belt, or is it stuck?”

She looked at me in wonder and began fumbling for the seat belt buckle. I clearly heard the click that released her, before her scream shattered the air.

When she ran out of breath, she panted for a moment before she spoke. “I'm sorry,” she said hoarsely.

I gritted my teeth into a smile. “Nothing to be sorry about. Let's get you out of there.”

I helped her out of the driver's seat and onto her shaky legs. Only as she straightened beside me did I see the swollen belly that the airbag had hidden. I had barely a second to recognise her pregnancy before another contraction seized her. My arms were strong enough to support her, but her scream was longer this time. I saw the blood and fluid staining the driver's seat and felt a frisson of fear.

No. Can't hesitate. I'll do whatever it takes to save her. I won't lose this patient.

When the sound had died away, I said quickly, “Let's get you to my car, where you can lie down.”

I helped her hobble to my car in time for her to topple into the back seat as her next contraction hit. Her scream rang in my ears, but I pulled out my phone, ready to ring for help as soon as she was silent.

I looked down. No signal. I held her life in my hands and mine alone. No, not just hers. Her unborn child, too.

For the first time, I smiled properly. “Then you're in luck. I'm Belinda, one of Albany Regional Hospital's best midwives and I'm on my way to work. I guess I'm starting early today, with you as my first patient. What's your name?”

“Miranda Nelson,” she groaned over the next contraction. A gout of blood soaked the seat beneath her.

“I'll buckle you up and then we'd best get going,” I said brightly, hoping there were no police up yet to catch me speeding. If I didn't get her to hospital soon, Miranda might bleed to death.

Not on my shift she won't.