The Poor Brother and the Rich 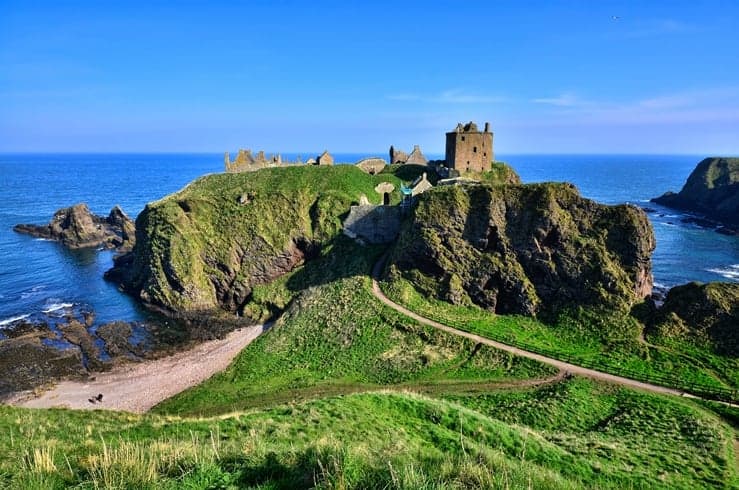 Today's classic tale was from Popular Tales of the Western Highlands, a collection of Scottish folklore collected by JF Campbell through many years of oral history research, and published in 1890.

There was a poor brother and a rich brother before now. The work that the poor one had, was to be at drains; he hired a gillie, and they had nothing with their mealtime but to take it without sauce. "Hadn't we better," said the gillie, "steal a cow of thy brother's lot?" They went and they did this.

The rich brother was taking a notion that it was they who stole his cow; and he did not know in what way he could contrive to find out if it were they who stole her. He went and he put his mother-­in‑law in a kist, and he came to seek room for the kist in his brother's house; he put bread and cheese with the crone in the kist; and there was a hole in it, in order that she might find out everything. The gillie found out that the crone was in the kist; he wetted sacks and put them on top of the kist; the water was streaming out of the sacks on the crone, and she was not hearing a word. He went, in the night, where the crone was, and he said to her, "Was she hearing?." "I am not," said she." "Art thou eating a few?" "I am not." "Give me a piece of the cheese, and I will cut it for thee." He cut the cheese, and he stuffed it into her throat till she was choked. The kist was taken home, and the dead crone in it. They buried the crone, and they laid out but little on her.

In the night, said the poor man's gillie to his master, "Is it not lamentable that such and such linen should go with the crone to the cell, ("KILL," cell a small church; hence applied to church‑yards) while the children are so much in want of shirts?" He went, and he took a spade with him, and he reached the church­yard. He dug the grave, and he took the crone from the coffin; he took off her the tais dress, he threw her on his back, and he came to the house of the rich brother; he went in with her, and he placed her seated at the fireside, and the tongs between her two feet. When the maid servant rose in the morning, she fell in a faint when she saw the crone before her. The rich brother thrashed his wife because of her mother saying, "that she was about to bring him to bare ruin." He went to the house of his poor brother and told that the crone had come home. "Ah ha!" said the gillie, "because thou didst not spend enough on her living, thou wilt spend it on her dead; I saw the like of this before; thou must lay out a good deal her."

They bought a good lot of things for the funeral, and they left the one half of it in the house of the poor brother and they buried the crone again. "Is it not lamentable," said the poor brother's gillie to his master, "that such a lot of linen should go on the crone, while thou art so much in want of a shirt thyself?" He went to the cell that night again, he raised the crone, he took off her the tais clothes, and he took her with him on his back; he went into the house of the rich brother, as was usual, and he set the crone standing at the end the dresser, with her claw full of seeds from the dish of sowens, as if she were eating it. When the man of the house saw her back in the morning, he thrashed his wife soundly, because of her mother. He went then to the house of his poor brother, and he told that the crone had come home again. "Aha!" said the gillie, "be­cause thou didst not spend money on her living, thou wilt spend it on her dead; I saw the like of this before." "Go thou, then, and lay out a good deal on her, for I am tired of her," said the man. He bought a good lot for the crone's funeral, and he took the one half to his master's house. They buried the crone. In the night, said the gillie to his master, "Is it not lamentable that such linen should go with the crone to the cell, while I myself am in such want of a shirt." He took himself to the cell, he raised the crone, he took off her the tais dress, he put her on top of him, and he reached the rich brother's house. He did not get in this journey, so he went with her to the stable, and he tied her on top of a year‑old colt. When they rose in the morning, they were well pleased when they did not see the crone before them. He was going from home; he went out to the stable, and he took the mare with him; but he never perceived that the crone was on top of the year‑old. When he went away on top of the mare, after him went the year‑old with the crone clattering on top of him. He turned back when he saw the crone, and he was like to kill his wife this time. He went to his brother's housee and he told that the crone had come back again.

"As thou didst not spend money on her living," said the gillie, "thou must spend it on her dead."

"Go and lay out as thou wilt on her," said he to the gillie, "but keep her away."

He went this time and he bought a good lot for the crone's funeral, and he invited every one in the place. They buried the crone again; and the poor brother was as wealthy as the other, by reason of the funerals.