Demelza CarltonPosted on April 3, 2019 Posted in Romance a Medieval Fairytale

I go to great lengths to research my books, and the greatest of these always seem to take place in the kitchen. Not being a Masterchef (or any kind of trained or celebrity chef), the chances of me making a perfect culinary masterpiece on the first go are as likely as me winning a Nobel Prize.

However...that doesn't stop me from trying. Especially when the character in the book I'm researching is a worse cook than me, so if I can make something edible, it's worth it.

For Cobble: Elves and the Shoemaker Retold, I decided to try and make a traditional Polish hunter's stew, a meal that goes back to at least medieval times (for those who could afford the meat). In Polish, it's called bigos, and it's the Polish equivalent of spaghetti bolognese. That means it's one of those things everyone in the country knows how to make, but there are as many recipes for it as there are cooks.

What they all had in common was that it's a dish with a lot of meat, a lot of cabbage, and a strong flavour because it's cooked for a long time. Some recipes even suggested cooking it for three days.

So, when I set out to make it, I had to combine about six different recipes and hunt down the ingredients in Australia, which is harder than I'd thought. On the plus side, this is the sort of meal that's meant to feed a family for a week, so once it's made, you're all good.

Cook the sausages, then slice them into bite sized pieces. Slice the smoked venison into pieces around the same size.

Put them into a slow cooker with a capacity of at least 6L. Add shredded cabbage, scotch fillet, drained sauerkraut, onion, garlic, paprika, caraway, apple, marjoram and thyme. Then pour beef stock and wine over the top.

Set the slow cooker on low heat, and stir every half hour or so, if you can.

The smell was eye-watering at first, and it took about six hours before it started to smell seriously appetising. Persevere - it's worth it.

At about the 8 hour mark, test the pork with a carving fork. If it falls apart, pull the pork out of the slow cooker and shred it between two forks, like you would with pulled pork. Then return it to the slow cooker.

After 12 hours, serve with thick slices of dense bread - we used Pane di Casa and a dark seeded lekkerbrot, but a dark rye or sourdough loaf would do just as well. 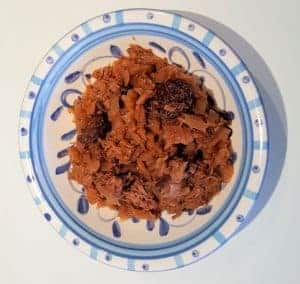 It tasted delicious, if not as good as the bigos we had at Wieliczka, at a restaurant near the salt mines outside Krakow that also feature in Cobble: Elves and the Shoemaker Retold, and I'd like to try swapping the beef stock for French onion soup and using white wine or cider instead of red wine, next time I make it.

But, all in all, my adventures with medieval cookery ended well 😀