Some call her evil…

Some call her evil…

Would you like to read a FREE sneak peek of Reflect: Snow White Retold? Well, you can...with the exclusive excerpt chapter below:

Xylander headed back to the inn, thinking to collect his things and ride away. Now Guinevere was safe, he could be on his way. Find his own destiny, so to speak, as far from his father as possible.

"Is she fair, the princess?"

"The fairest lady I have ever seen. Skin white as fresh-fallen snow, lips as red as blood…"

Xylander grinned. Guinevere didn't think she had any beauty to speak of, but she'd turned every head in court today, male and female alike. She'd been wasted, shut up in Father's castle. Here, she would be allowed to bloom.

Or at least he hoped so. Perhaps he should stay for a little while, just to see how her marriage suited her. He owed her that.

"…and hair as black as ebony. The prettiest princess you ever saw, with a heart so soft, she covers her face and weeps at the sight of blood."

They weren't talking about Guinevere. Xylander had seen his sister hawking with their mother, and when her falcon had brought her a duck or a fat pigeon, she'd snapped their necks like any born hunter. Quick, decisive, yet without cruelty or enjoyment, heedless of the blood on her hands from the wounds the falcon's talons had gouged in her prey.

Even on the day Mother's gyrfalcon, Circe, had sliced through Mother's glove and drawn blood, Guinevere had held her head high, taking the bird from Mother before cleaning and bandaging Mother's arm. He'd wished for Guinevere, the first – and last – time he'd come to Castrum.

"When she takes her place as queen, then we will truly know peace."

Xylander choked back a laugh. A leader who could not stand the sight of blood would not be strong enough to maintain any kind of peace.

"You dare laugh at our future queen?" a cool voice demanded.

Xylander blinked, realising the merchant was addressing him. Evidently he hadn't choked back his laughter soon enough. "It takes a strong leader to ensure peace. One like King Artorius. He's taking a new wife soon, who may yet give him a son. If she does, the princess will never be queen."

The merchant shook his head pityingly. "You know little of our king, sir. He has not taken another wife because he means to see Princess Zurine inherit his throne. The only son he wants is a son in law, a fitting consort for the princess, but no man is good enough."

Xylander opened his mouth to say that Artorius had thought he was good enough, then snapped it shut again. He was pretending to be a knight, not a prince. And he did not want their ebon-haired  princess, who would never want to come hunting with him. He imagined her as a dark raincloud, raining tears too often.

Instead, he said, "The new queen is fair. Fair of eye and hair and skin…why, it might be said she is fairer than Princess Zurine. With a wife so fair, surely the King will not be able to resist begetting a son. Several, maybe."

One man slammed his empty cup down on the table. "Princess Zurine is the fairest maiden in the land, and I will fight any man who says otherwise!"

Xylander reached for his sword. "Princess Guinevere is fairer, and I will answer such an insult with my blade!"

He had barely a moment to think that perhaps Castrum was worth staying in, after all, if it was to be this much fun, before the brawl began in earnest and he found himself in the middle of the best fight he'd had in years. 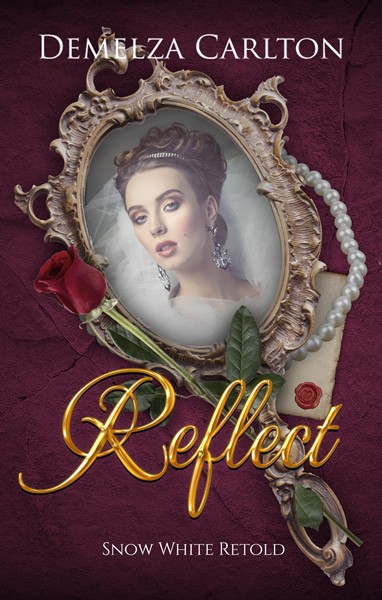 A princess in danger. A heroic huntsman. A reflection revealing too much truth.
Once upon a time...
Princess Guinevere and her brother, Prince Xylander, flee the mad king's court in search of a marriage alliance with another kingdom.
But when Guinevere's new husband falls ill and his only heir goes missing, Guinevere and Xylander must save the suddenly hostile kingdom or face exile...and their father's wrath.
Mirror, mirror on the wall...whose will be the worst fate of all?

Start reading it now from: