I've always wondered where Mammoth Cave got its name. Plenty of megafauna fossils were found there, but no mammoths. Still, that makes Mammoth Cave over 50,000 years old…which is quite young for a cave.

If you want a bit of background about how a cave can only be 50,000 years young, you can check out my post on caves HERE. It explains what the various cave formations are, too, and how they were formed in the first place.

Right. Fast forward 50,000 years to Mammoth Cave today. Looking for inspiration for some of Hell's other caverns, I'd already thought of Lake Cave for Hell's Bathroom, but I found an intriguing picture of Mammoth Cave with a large lake in it. Now, I'd never seen such a thing in Mammoth Cave, but the photos were recent and some investigation uncovered that it had a seasonal creek. Wet season here in Western Australia is winter, so I headed out to the cave in June. It was raining, all right, but the creek was just a trickle – there was no sign of the big reflective lake. So I trooped out of the cave all dejected, resolving to return later in the season when we'd had more rain. After all, I still had some research to do for Afterlife of Alanna Miller in Busselton and it was a relatively short drive to the caves. Plus, I'd had my tripod confiscated when I tried to enter the cave with it, so even if I had found a reflective lake, I wouldn't have been able to take the steady, long exposure shots I needed to truly capture the cave reflections on my camera.

I did manage to spend a lot of time snapping at the ceiling and the dry floor though – as evident by my fascination with the spiky stalactites and suggestive stalagmites (yes, they had Lucifer written all over them). 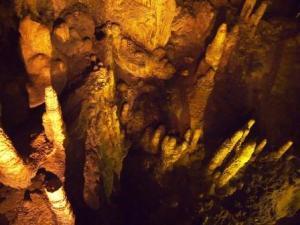 So I returned in August. I had my camera, a high-powered torch to highlight features that I wanted to photograph that weren't already well lit, negating the need for long exposures, and my fingers crossed that the heavy rain we'd had for the last week culminating in the previous night's storm would give me my creek.

I should mention that Mammoth Cave is a self-guided tour where you get assigned an mp3-player with a tiny torch attached to take you through the cave. You proceed at your own pace along the narrow staircases and catwalks, where there's no space for a tripod, even if I had managed to smuggle one in.

I reached the cave car park early, hoping to be one of the first in the cave so I could take my time taking heaps of photos. I was early, but not early enough – a bus full of retirees on tour beat me to the entrance. Being a huge tour group, they got their own tour guide, too, which I hadn't counted on. I could either go in first and have the tour group nipping at my heels the whole way through, or I could wait until they were well inside and follow at my own leisurely pace.

There are some really lovely bushwalking trails near Mammoth Cave, and I'd hiked them on my June visit, so I chose to wait for the tour group to go in and go for a walk instead. Especially as the cave's creek flows through one of the trails – I'd be able to get an idea of how much water was in the cave by a glance at the water level in the creek, which had been completely dry on my first trip.

I asked the guy at the ticket desk where the trail started (seeing as I found it from the other end last time) and he said it was closed because of the creek. I explained that it was the creek I wanted to see – presumably that meant the water was high enough to cover the stepping stones.

“Yes,” he said. “But if you want to cross the creek, prepare to get wet. They're slippery and you'll probably fall in.”

I had no intention of ending up on my backside in the creek, so I proceeded carefully – past the official sign saying the track was closed, right up to where the sky and the ground inverted.

I'd found the creek, all right.

But if I wasn't paying attention, it would have been so easy to just slosh right in. If you've read The Holiday From Hell, you might recognise a few of these scenes, as the creek inspired an interesting incident where Luce found an opportunity to take his pants off. If you haven't read it…well, I won't spoil it for you.

With my imagination spinning through the possibilities, I videoed the whole walk back from the creek to the sign telling me the track was closed. I figured I might need to remember the spiky plants I encountered along the way…not to mention the huge tour bus parked right at the end of the trail. Those frisky retirees…ah, but they'd vanished. They were on their tour of the cave and it was my turn to follow them in, secure in the knowledge that there'd be plenty of water to photograph.

So, first, the megafauna. Specifically, Zygomaturus trilobus, a sort of giant wombat that weighed up to a tonne and wandered around chomping on plantlife in the Australia's south west until around 45,000 years ago. The remains of 22 of them have been found in Mammoth Cave. The statue outside is an artist's impression, based on the skeleton, but it's certainly an odd-looking beast.

One of the fossils remains in situ, trapped in flowstone inside the cave for over 40,000 years. Yep, that's a giant wombat jawbone.

Then there's the mammoth the cave presumably takes its name from. You need to get the lighting just right to see in in the flowstone accretion partway inside. Really, I could only make out its head, trunk and the hump on its withers and even that's fairly vague.

And the creek inside, with all the reflections? Oh, I had some fun with that. 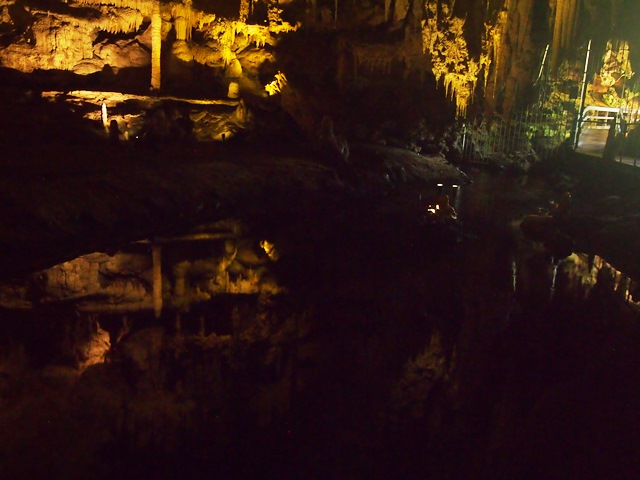 But after photographing everything I could find inside the cave and generally enjoying spotlighting everything along the way, I figured it was time to go. Up and out and…ooh, my favourite thing: stairs! 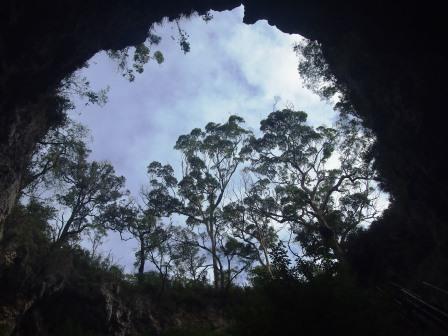 And what was all my research in aid of? Oh, heading to Hell, of course! All in the name of research for my Mel Goes to Hell series!