Demelza CarltonPosted on January 21, 2014 Posted in Mel Goes To Hell

Time to go back to Hell – deeper, darker, to Lucifer’s lair…all for the Mel Goes To Hell series.

Originally inspired by a badly-placed briefcase, this story has evolved from a series of comic shorts to something deeper with more angels, more demons and which ventures from the depths of Hell to the very gates of Heaven itself (or Jannah, if you prefer). My research has taken a strange turn – from straight theology and a desire to start watching Supernatural again to fourteenth century morality poetry and paintings by Botticelli.

Mel is an unusual angel, sent on assignment to work in the HELL Corporation, which is everything it sounds. The CEO, Lucifer, wishes to be known as Luce and he always has an open door policy – mostly so he can see if his PA is wearing a short skirt today. Between the salacious but bureaucratic demons, Mel and her subordinate angels are trying to prevent the powers of HELL from taking over Earth’s governments – as the push for privatisation plays neatly into their hands. 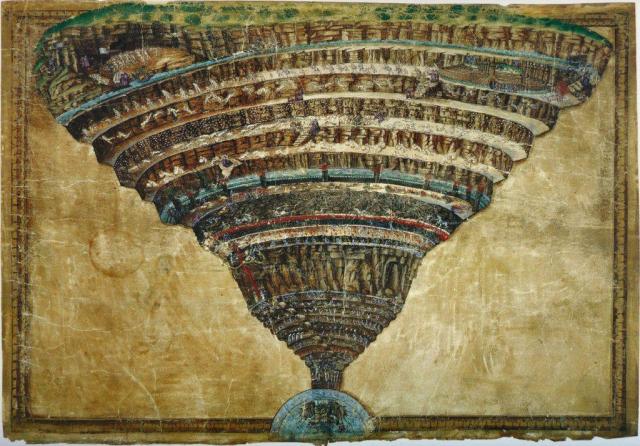 Map of Lower Hell by Stradanus

Right – following on from last week, after crossing the battle in the River Styx, there’s the City of Dis, the walls guarding the deepest, darkest depths of Hell. Enjoy!

Dis is a walled underworld city, surrounded by the River Styx. Guarded by fallen angels, the city gates can only be opened by an angel.

The Sixth Circle of Hell is for heretics, whose fate is to buried in flaming tombs, burning for eternity.

This one’s for violent criminals, divided into three circles, each of which has differing levels of punishment. Those in the outer circle are submerged in a river of boiling blood and fire. The depth they’re submerged is dependent on their crime – and there are centaur archers patrolling the outside of the circle, ready to fire arrows at anyone who tries to get out of the river. Those in the middle circle can either be turned into trees and bushes, to be shredded and consumed by harpies, or they can stay in their own form and be chased and mauled by hungry dogs. The inner circle is subject to burning rain falling from the sky in a desert of burning sand – and this includes usurers or anyone who lends money for interest.

A demon named Geryon presides over the eighth circle of Hell, which is divided into ten “bolgies” – each bolgia separated from the others by stony ditches with bridges between them. Punishments and crimes vary between each of the bolgies, but they include being forced to march while being whipped by demons; burial head-first in a rock; having their heads twisted around so they walk backwards; sitting in a lake of boiling pitch if you’re a corrupt politician; being bitten by snakes and lizards if you’re a thief; concealment in individual flames; repeated dismemberment by demons; and affliction with various diseases if you’re an alchemist.

This circle is reserved for treachery and it has four Rounds. All the residents of the ninth circle are thrown in an icy lake. The depth they’re frozen in depends on the extent of their crimes. So, this part of Hell really is frozen over!

Dante describes the centre of Hell as where Satan is imprisoned, waist deep in his own ice lake, beating his wings into a storm to escape. Apparently, he’s also chewing on some traitors.

Welcome to Hell. Mel will join you shortly – as she’s due to be unleashed on the Pit in February. Angels and demons never looked so good.