Gabriel (or Gabrielle, also called Jibra'il) is portrayed in various sources as either male or female. Whether this archangel is simply androgynous or can appear as either gender at will is unknown. This angel's name means both “man of God” and “God is mighty”.

As an archangel, Gabriel is responsible for delivering messages from God to individual humans. Some of the more notable people who received these messages were Daniel in the Book of Daniel; the Prophet Mohammad in the Qur'an; Mary, Jesus' mother, and Zacharias, John the Baptist's father, in both the Bible's New Testament and the Qur'an. Because of Gabriel's important role as a messenger, he's considered to be the patron saint of communications workers.

Gabriel is sometimes portrayed as blowing a horn, which signifies the end of days. This appears to be a post-Renaissance idea in Christian culture, as in Islam, the horn-blower is Israfil (or Raphael).

Gabriel and the Qur'an

In the Qur'an, Gabriel is described as the archangel who first appeared to the Prophet Mohammad and revealed the scriptures to him.

Gabrielle in Mel Goes to Hell 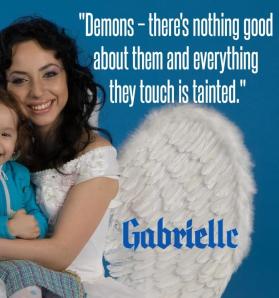 At the beginning of the Mel Goes to Hell series, Gabi is working with the archangel Uriel, her partner, in Russia. As the situation in the HELL Corporation heats up, Raphael summons her to Perth to help Mel out in the office – and to positively identify Lucifer. Being the patron saint of communications workers, she's ideal for the position of temporary receptionist and switchboard operator.

Gabrielle is a very traditional angel, who believes that demons are damned and should be shunned at all costs. You can't trust them not to taint anything – including the office coffee machine.

A fan of sweet, iced, frothy coffee, Gabi makes it her mission to keep Mel out of Lucifer's clutches, enlisting the help of some well-built Grigori angels in the Agency – though Mel has already made her own plans.