↓ Skip to Main Content
Home › Mel Goes To Hell › Onsens and Orgies…Oh, My

Demelza CarltonPosted on June 3, 2014 Posted in Mel Goes To Hell

Some experiences are so good you have to share them and I have – frequently.

First, you strip naked and lock up all your clothes. Then you slather yourself in soap and wash until you’re squeaky clean. Then, you’re free to share the pleasure of the steamy atmosphere with a group of equally naked strangers.

Actually, I don’t. Unless you count the scene with the twins in Ocean’s Infiltrator…ahem.

I’m referring to the Japanese customs and etiquette in an onsen. 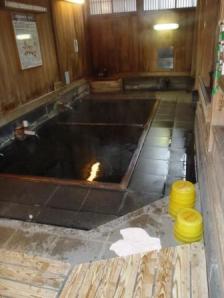 An onsen is a sort of hot spring spa. They can be indoors or outside, sex-segregated or mixed, filled with water from a hot water system or (my personal favourite) natural, volcanic hot springs. It’s a kind of communal bathtub that is very much a part of the culture in Japan.

And if just the thought of sharing a bath with someone puts you off – that’s why hygiene is paramount.

Not being Japanese, I find that the locals always stare at me the first time I enter an onsen. They watch me like hawks to make sure I know the correct procedure – and they’re very helpful if you seem uncertain. After all, they don’t want to share their bath with an unwashed Westerner, either.

“It is our custom to bathe nacked.”

When I stayed at Nozawa Onsen, a small town in Nagano Prefecture that’s known for its skiing, onsens and apples (bigger than any other apple you’ve seen and they make amazing wine, too), every tourist brochure included a picture of naked men that became familiar all too quickly. In an onsen town, you must behave like their naked…sorry, NACKED men…or face the legal consequences.

If you’re wondering why I’ve included a description of Japanese bathing customs, when most of my books are set in Australia, then you probably haven’t read See You in Hell yet. Without giving too much away, the demons aren’t accustomed to getting time off work to travel…so on Mephistopheles’ first holiday ever, Mel suggests that the demon should take her skiing-obsessed partner to Japan. Nozawa Onsen, to be precise.

Care for a taste of what demons get up to while they’re on holidays?

“Mel! Oh, you won’t believe how wonderful it was! Bob and I…we…were arrested by the Japanese police.” Mephi blushed, looking absurdly proud.

Mel wasn’t sure whether to laugh, smile or look concerned. “I’m happy to hear you enjoyed your holiday. I hope it was all a misunderstanding,” she said carefully.

Mephi giggled, sounding eerily like Persi instead of her usual efficient self. “Public nudity, disturbing the peace…property damage…inciting public violence…rioting…misuse of public property…oh, it was incredible. Bob and I spent half the night naked on the futons, but we got too hot and decided to try a romp in the snow. My knees went numb, so I insisted we visit the hot springs, but the indoor ones wouldn’t let us in together, because they keep men and women separate – can you imagine? So we found some up the hill that were outdoors and not segregated…”

Mel coughed. “Up the hill…you mean the cooking hot springs? The ones that are too hot for humans, with all the warning signs?”

“Humans, maybe, but they were just a warm bath to us demons, dear. And we steamed them up a fair bit more before we were done. So we had another roll in the snow…and fell through someone’s basement window. We climbed out, had another wash in the hot springs – just to disinfect, of course, the cuts from the broken glass, but one thing led to another and…by that time some of the townspeople were up and they were very rude, so Bob broke off a length of the chain fence and used it to protect me…” Mephi’s eyes misted over at the memory.

What can I say? My Mel Goes to Hell series is hardly your ordinary angels vs demons story.