Saint Michael the Archangel – The Man with the Sword

Saint Michael the Archangel – The Man with the Sword Healer, protector and leader against the armies of Satan, Michael's name means, “Who is like God?”. He's described in Christian, Jewish and Islamic religious texts and he's believed to be the angel responsible for Satan's defeat and banishment from Heaven.
He's suggested to be the leader of the Seraphim, but also just the Archangel in charge of the lowest level of angels, those who have no other choir (you can read more on ranks of angels HERE).

Michael is described in several sources as the rescuer of faithful souls. He's reputed to have stood guard over Moses' body and over Eve's body, too. He fought Samael (described in some sources as a fallen angel, who grabbed Michael's wings and tried to pull him down with him when he fell) for Moses' body.

In the Catholic faith, Michael has the interesting task of giving souls near death the chance to redeem themselves in their last hour. Seeing as he's usually in the right place at the right time, he also brings newly-dead souls to judgement at the gates of Heaven. This is consistent with his depiction as the leader of the lowest choir of angels, who fulfil similar roles in guiding souls to their final judgement.

Michael has a reputation as a heavenly physician. He's believed to have appeared to the Emperor Constantine at Sosthenion, south of Constantinople.
Egyptian Christians placed the Nile under his protection, as this river was so important in their lives.

Michael is frequently portrayed in religious art in armour and armed with a sword – sometimes with or without flames.

In Lucifer‘s war against Heaven, Michael was the leader of the armies who opposed him, as well as the one who personally dispatched Lucifer to Hell.

Michael in Mel Goes to Hell

Michael in my Mel Goes to Hell series is an archangel – one of the guardians at Heaven's gate who stands in judgement over souls who wish to enter. Clad in armour and bearing a flaming sword, he makes quite an impressive guard. Since he banished Lucifer, he stands guard to make sure the fallen angel doesn't return to Heaven.
However, there is another side to Michael. He's Melody Angel's younger brother – and he's very protective of his sister. He and Raphael met as brothers in arms during the Heavenly War against Lucifer and it's hard to say who's more important to him – Raphael or Mel. Both he and Raphael are united in their mission to protect Mel at all costs. Mel, of course, has her own ideas and Michael's hands are very much tied in this situation. 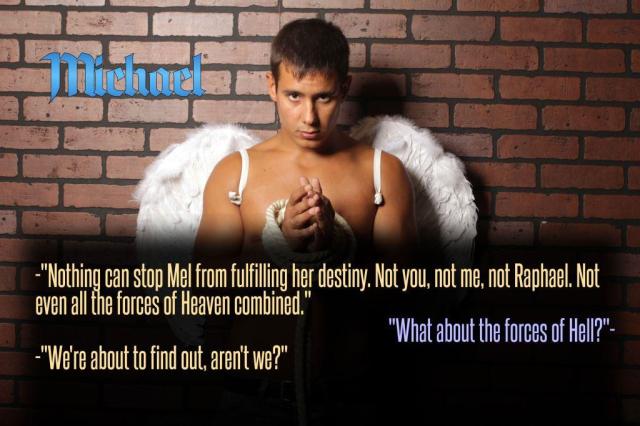