I'd like to introduce you to five of the darker denizens of Hell. From poker players to raping, poisoning centaurs to a bit of BDSM…these demons are definitely in the right place in the Pit of Despair.

Rumour has it that Asmodeus is the son of the angel of prostitution, Naamah, and Adam, the first man, so it may come as no surprise that he's the demon of lust. He's also responsible for inciting gambling and most of the gambling in Hell is overseen by him. 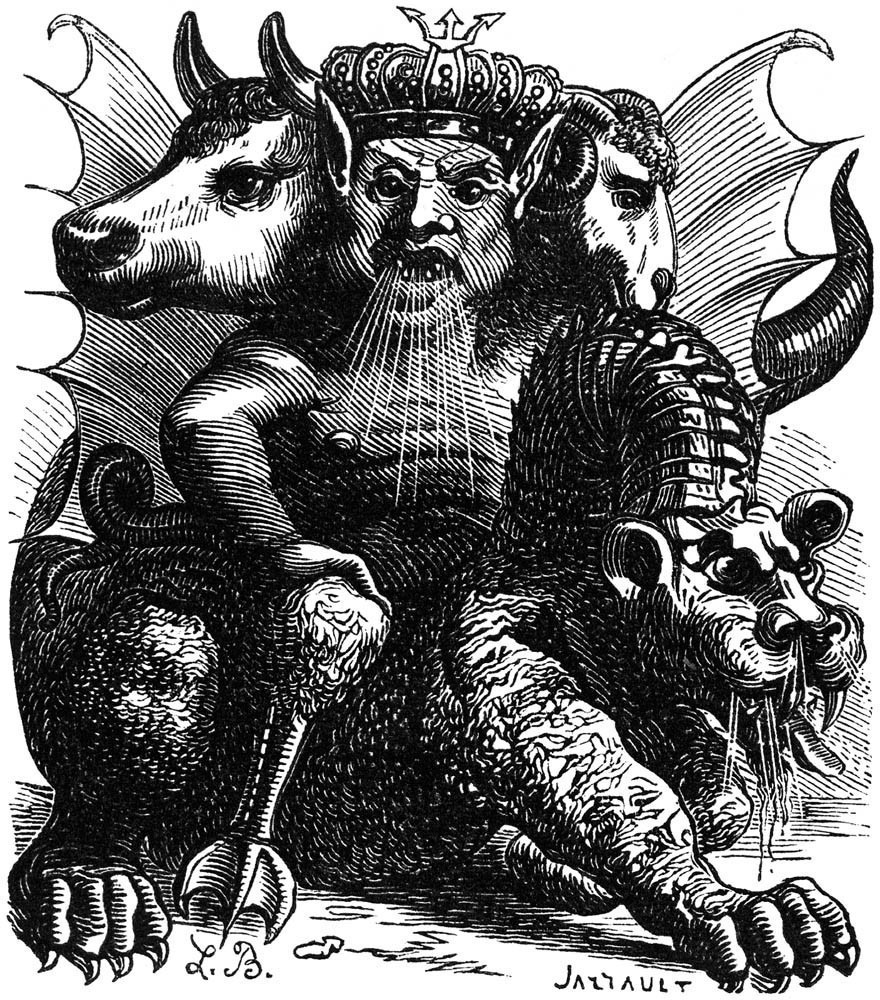 He once fell in love with a woman named Sara, murdering her husbands until the archangel Raphael chased him away from her and back to Hell. His favourite pastime is tormenting newlyweds with all sorts of problems – both in the bedroom and in the rest of their lives.
In Hell, he guards the gates to the Underworld city of Dis, along with Kasyade and Merihim. They generally play cards to pass the time. He once had a brief love affair with Lilith, before she grew bored.
In the HELL Corporation, he's known as Mo, the policy officer in the Brothel Regulation Unit who seems to always have to fill the printer with paper – a dangerous task in stationery shortages.

Kasyade means both “observer of the hands” and “covered or concealed hand or power.” So while he's the dealer and generally the one who watches his fellow poker-players for cheating, he's definitely demonic in cheating whenever no one else is looking.

Merihim is the dark prince of pestilence, but in the HELL Corporation he's known as Merih, the manager of the Public Health Unit. He has a bit of a crush on Mel.

Nessos is a centaur who used to ferry people across the Euenos River on his back. One day, his passenger was Hercules' wife, Deianeira. During their short ride, Nessos decided he wanted a ride of a different sort and attempted to rape Deianeira while Hercules was still on the opposite bank of the river.

Hercules shot Nessos in the heart with a hydra-poisoned arrow. As the centaur lay dying, he told Deianeira that his blood was a powerful love charm that would ensure that Hercules remained faithful to her. She took some of his blood and later stained one of Hercules' shirts with it. When Hercules wore the poisoned shirt, it burned him to death.
Nessos is now the ferryman for the River Phlegethon in the seventh level of Hell and he hasn't lost his taste for personal payment from his female passengers.

Geryon was the grandson of Medusa, but he quietly kept red cattle on the island of Erytheia with the help of Cerberus' two-headed dog brother, Orthrus. That is, until Hercules came to fulfil his tenth labour, by stealing Geryon's cattle. Hercules clubbed Orthrus, the watchdog, then Eurytion, Geryon's herdsman, so Geryon donned his armour and attacked Hercules. Hercules was the victor – Geryon died with a poison-tipped arrow in his forehead.

Geryon is the guardian of the eighth level of Hell, where some of the worst sinners are sent. His demonic form has a human face, lion's paws and a wyvern's body, complete with leathery wings, and a tail with a venomous tip. He lives in the caves in the cliffs between Level Seven and Level Eight in Hell with his wife, the harpy Jezebeth.

In the HELL Corporation, he's known as Gerry and he reports to Merihim in the Health Unit. He's particularly partial to a bit of bondage and discipline with his wife, when he dons his mankini and she gets enthusiastic with her flogger.