To achieve perfection, a storm must cause a hell of a lot of damage. This one did…and it didn't even have a name.

Christmas Island is no stranger to tropical storms and cyclones. A cyclone passes within 100km of the island every year or two during the summer cyclone season. They rarely do much damage, but there are exceptions.

On 1 January 1932, a particularly strong cyclone hit Christmas Island. The normally calm Flying Fish Cove bore the brunt of it.

First, the raging swell came into the cove. Calm water became a raging maelstrom, washing clean over the top of the loading piers.

On the 2nd January, the storm only got worse.

The combination of incessant rain and pounding waves ate away at the Kampong main road until it washed away entirely.

By noon, the swell had grown so huge that the waves topped the entire loading area, including the oil tanks.

The waves were so strong that they demolished most of the No 2 loading pier and smashed the loading sheds into kindling.

As the waves kept on coming, they carried debris as high as the treeline, littering Flying Fish Cove with the remains of the island's precious infrastructure. 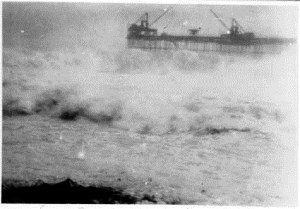 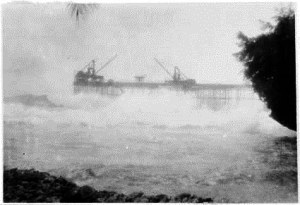 But there was worse to come.

For days, the torrential rain had been softening up the soil at the top of the cliffs above the Kampong. By the early hours of the morning of the 3rd of January, they were completely saturated. The cliffs gave way in a massive landslide that picked up trees and boulders, engulfing and destroying most of the Malay Kampong below.

By some miracle, there were no casualties, and William Browning Jackson, then the Island Manager and Tuan, opened his house to the homeless Malay women and children. His wife and children played host to 22 unexpected houseguests while Jackson and the Malay men salvaged what they could from their buried former homes.

So when you're reading Ocean's Widow…no, I didn't make the storm up, nor its aftermath.

Here There Be Dragons