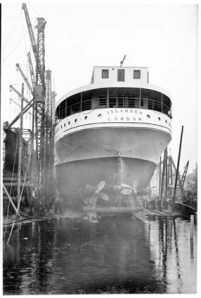 If you’re going to stow away on a ship, make sure it’s one with modern facilities and a minimum of rats.

Maria in Ocean’s Trial didn’t have time to check the facilities or the rat population when she sneaked aboard the TSS Islander in Fremantle, but perhaps she should have. Perhaps she would have tried a bit harder to pay her passage instead.

Build in Grangemouth Dockyard in Scotland, the Turbine Steam Ship (TSS) Islander was commissioned by the Christmas Island Phosphate Company as the supply vessel for their Christmas Island operations. She was built to carry both cargo and passengers, to the tune of 1598 tons, and withstand tropical climates.

In Flying Fish Cove, the only safe anchorage at Christmas Island, there was a triangular pier known variously as the Islander Jetty, the Triangular Jetty or the Japanese Pier, as the Japanese guano vessels used this jetty, too. 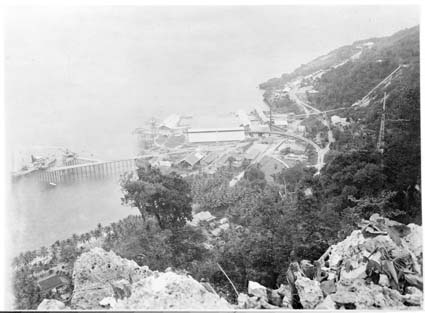 Flying Fish Cove in 1929 from the clifftop

This pier was damaged when a Japanese guano vessel, Nissei Maru, moored there in 1943 exploded and sank under mysterious circumstances. The island was occupied by Japanese forces at the time, so the ship is reputed to have been sunk by either an Allied submarine or saboteurs among the mining personnel, who were loading the vessel at the time of the incident. A storm in 1951 did even more damage to the jetty and it was demolished soon after.

Despite having a dedicated pier for the Islander, sometimes cargo and passengers had to be winched up the cliffs at Waterfall, when weather and wave conditions in Flying Fish Cove were unfavourable.

Luckily for Maria, when she arrived at Christmas Island, the ship was unloaded at the Triangular Jetty in Flying Fish Cove…though I don’t think she ever had any intention of taking the winch cage up the cliffs.