A Little Bit of History

When it was originally constructed in 1864, the Busselton Jetty was only 176m long. Originally, it was built to ensure that ships paid their import and export duties, a major source of taxation income to the young Swan River colony. When a ship landed its cargo in Geographe Bay and lightered it ashore in small boats, they didn't pay any duties or taxes on the cargo. The jetty opened to cargo in 1865.

At the time, the high tide mark of the jetty was 200m inshore of the present one – today, the spot is marked by the junction of Marine Terrace and Queen Street in Busselton.

Geographe Bay is one of those beaches where sand is deposited, not eroded away, so the Busselton shire council made it longer…and longer.

The timber industry in Western Australia was booming and the timber ships demanded a deeper water port for their ships. So, the jetty was extended again – 353 m in 1887, and another 40 m in 1890.

But between the tourists using the shallow end of the jetty for diving, fishing and bathing, along with the changing sheds constructed on it, and the sheer age of the first section of the jetty, it was deemed not strong enough to support a rail line. Engineers persevered, though, and in 1911 a 635 m long skeleton jetty was constructed 166m east of the existing jetty, which met the original jetty part way along, and was strong enough to carry a steam train to the loading end of the jetty.

Of course, construction wouldn't be complete without another extension…603 m this time, allowing for ships with a draft of 7.6 m. Just in case, the construction activities included extensive dredging in Geographe Bay.

1960 saw the final extension to the jetty – just 16 m. At the time, Bunbury Port was expanding and the steam train was replaced by a diesel one.

In 1972, Busselton Jetty was closed in favour of Bunbury, after a century of shipping. In that century, the jetty unloaded and loaded over 5000 ships.

There was talk of demolishing the jetty, due to the huge cost of maintaining such an enormous, wooden structure, but public outcry led the Shire of Busselton to assume ownership from the State Government…and look for a way to preserve the jetty.

But demolition was inevitable. The public had no say in it at all.

On 4 April 1978, Cyclone Alby swept down the Western Australian coast…and took out the oldest 700m of the original jetty, closest to shore, strewing wreckage up and down Geographe Bay. This entire section was demolished and never rebuilt. But the skeleton jetty remained.

A massive community clean-up effort ensued, leading to the formation of the Busselton Jetty Preservation Committee, which later became the Busselton Jetty Environment and Conservation Association (BJECA). This organisation started collecting an entrance fee from those who used the jetty.

In 1999, a fire broke out on the jetty, isolating about 150 m at the deep water end. There were plans for an underwater observatory there, but these plans went on hold as the damage was assessed. It was decided to continue with the planned underwater observatory, which opened in 2003. If you'd like to see a live feed from the webcams there, you can view those HERE.

But structural assessments of the jetty identified that the timber needed more restoration – in fact, it probably needed to be replaced. The train ceased running in 2005 as a result.

In 2011, following a huge multi-million-dollar refurbishment project, the jetty reopened as the structure you can see today.

The far end looks a long way away as you pass the Interpretive Centre at the shore end of the jetty. 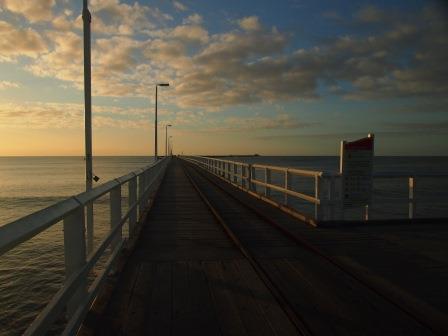 Yet inside, you can buy a ticket to the underwater observatory, to ride the train or just to walk the jetty in daylight. Of course, there's free entry after business hours, as the train stops running and the centre closes. But the jetty looks just as pretty at night as by day…

Of course, it's changed somewhat since I first fished off that wooden jetty in the 1980s. The original timber beams are gone from the surface, replaced by harder-wearing concrete, but the timber piles remain – even if some of the older ones are only considered safe for seabirds.

And fishing off the jetty is an old Australian tradition. Then…

I have childhood memories of catching heaps of blowfish, which were always thrown back, seagulls stealing bait and the occasional fishing rod…oh, and the inevitable rust stains on my pants from sitting on that rusty rail line.

So when I included a scene in Busselton in my recent release, Afterlife of Alanna Miller, the third and final book in my Nightmares Trilogy…I couldn't resist. Even Nathan and Caitlin had to go for a sunset walk along the Busselton jetty, as I did on my research trip for their book.