When Past and Present Collide

When Past and Present Collide

I swear, I should be used to it by now. Truth is stranger than fiction and the weirdest coincidences happen in real life that seem completely unbelievable…except when they happen to you.

Okay. Let me set the scene. Twenty years ago, I started writing my Nightmares Trilogy. One book, not three, which was about a girl who was abducted, survived (though just barely) and recovered. Part of her recovery process was returning to the scene of the crime…but through her horrible nightmares you get an insight into what happened to her.

In the first, much-revised-and-rewritten-since version of the story, Nathan and Caitlin return to the area where she was found and stay in a guesthouse. This house is rambling, constructed from several joined buildings, but small enough that the owner lives onsite. And an incident happens late one night that rouses all the residents, who promptly get the wrong idea about what's going on.

I don't give spoilers, so I won't say any more about the plot…but the guesthouse was a figment of my imagination, based on backpackers' places I've stayed at. I was thinking something like the Inne Town Backpackers in Margaret River, only closer to the ocean. Possible. Plausible… but imaginary.

In a rewrite more than ten years ago, that scene got edited out. It wasn't relevant, so it ended up on the cutting room floor – or the folder for superceded versions on my PC.

Caitlin was kidnapped and held in an old World War II bunker. This isn't a secret or a spoiler – in fact, you can find out more about my research into these HERE. I'd visited the ones at Point Peron as a child, so these must have been uppermost in my mind when I wrote the series. However, Caitlin was held in a site surrounded by bush, which makes it unlikely to have been Rockingham or Point Peron. That meant further south…and I know there were World War II structures all the way south in Albany, but I wondered…were there any in between?

The answer is yes. There were underground bunkers in Busselton, where there was a Royal Australian Air Force base and a quarantine station. The air field, the bunkers and the station have since been demolished and/or relocated, but I set off down there to find out what still remained. And my search uncovered a little bit of history about what happened to the old base structures – some of the buildings were dismantled and trucked to Busselton, where they became the basis of many houses, some of which still remain.

One of these is the Busselton Guesthouse…which is still open today.

So where did I choose to stay on my research trip?

Beds By the Bay

Beds by the Bay, also known as the Busselton Guesthouse, opened in 1948. Made of the officer's mess and two other buildings from the air base, it's been open to visitors for over sixty years. And it's no surprise why.

It's located a short walk from the Busselton Jetty, past a spooky-looking pioneer cemetery (which I don't recommend you walk past in the dark, like I did!) and several caravan parks.

And just up the road from the local history museum, which was an added bonus for someone researching a bit of Busselton history.

I wanted a site close to the beach, the jetty…and I'm partial to a cooked breakfast in the morning. Luckily for me, they do a damn good one. One I was too busy enjoying to bother taking photos of.

But as I settled in on the first night, I decided to write a little bit of Afterlife, inspired by my night-time walk on the jetty…and my fish and chip dinner. It was winter and the wind had picked up outside, blowing rain at my walls and whipping the unseen surf up until I could hear the breakers booming. And don't forget that old cemetery nearby…curse my vivid imagination. Not to mention the particularly inspiring bottle of cider that…ha, I must have shifted before I took the photo.

Right…so if I figured I had fodder for nightmares in my imagination alone, it was a given that I had to set a little of my Nightmares series in the Busselton Guesthouse.

So…Caitlin booked two rooms – 3 and 4, right across the corridor from one another. 3 had a sofabed and lots of windows while 4 was a touch less luxurious.

For the record, 4 was mine.

Now, Nathan and Caitlin never made much use of the veranda or the spa…but just in case they did, I made sure to do thorough research there all the same. Of course with a glass of local wine in hand, as recommended by my hosts…what do you take me for? 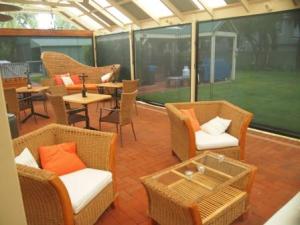 It wasn't until the next morning that I thought to take pictures of the dining room and common room, too. I mean, with Nathan and Caitlin staying there, I HAD to know where all the furniture was. What if they ended up in a combat situation with terrorists? It wouldn't be the first time…

Many, many thanks again to Beth and Mike from Busselton Guesthouse, aka Beds By the Bay, for their kind hospitality, amazing breakfasts and the inspiration to finish a book. I promise I left the guesthouse standing…and kept the casualties to a minimum.

If you're wondering what I'm on about, writing Nightmares…you can find out more about my Nightmares Trilogy HERE.

Thighs as Taut as a Fully Laden Clothes Line

Nightmares and Book Tours – Oh, My!