Ever want to try something different? A change of position or perspective? 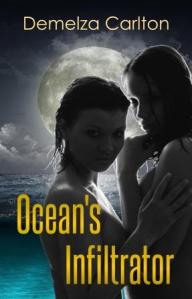 I try to write a story or scene from the most appropriate perspective. Sometimes, that means it’s told from a disinterested observer and not the protagonist at all. In my Ocean’s Gift series, Vanessa is one of the main characters, yet she tells you very little of the story. There’s an incident with a hammerhead shark in Ocean’s Infiltrator where I chose to write that scene from her point of view – but it was a tough decision whether to use her or Joe Fisher.

For those who don’t know Joe (and those who do and want more of him), I figured I’d share the chapter I didn’t use – Joe’s perspective of the hammerhead incident. This scene is in Ocean’s Infiltrator, but it reads very differently when related by Joe:

“Watch this, Daddy!” She leaped from the back of the boat, splashing me and the deck. Marina surfaced, spitting a little fountain of water as she floated on her back. “See? You should come in, Daddy. It’s lovely and warm and there are so many fishies!”

I should go in, I told myself. She’s so little and the Indian Ocean’s so huge. The airline lost a jet in there a few weeks ago and they still haven’t found it. Anything could happen to her and I’m afraid to get my toes wet.

“Mummy, make Daddy come in! I want to show him the fishies!” Marina called.

The warmth of Vanessa’s body at my back was a welcome relief. “He can see you better from here, sweetheart. Daddy’s not as good at swimming as you, and I have to find that lobster who escaped this morning, when we were pulling the pots. He was a big, fat one – he’ll be Grade A at the fish markets – and I don’t want him snapping off any of your daddy’s toes!”

Marina pouted. “Yes, Mummy.” She dived beneath the surface, curling into a somersault.

“Just keep an eye on her, Joe. Call me if there’s any trouble,” Vanessa murmured, kissing my neck.

I leaned out, pressing closer to the side. Marina hadn’t surfaced yet. My toes tangled in the rope, but I barely noticed anything but the rough sensation of braided nylon. Marina – where was she?

“Did you see? Did you see?” The squeal came from the other side of the boat. I cleared the deck in three strides, so I could see Marina shaking the water from her hair. “There was a big fish – as big as me! He swam right under the boat and I followed him! But he’s gone now. He swam away. I’m going to call him Kingie.”

I managed to smile. “Are you going to name all the fish, sweetheart? I hope you have enough names.” I kicked aside some fins so I could get closer to the side. “You still haven’t – aw, shit!”
Lobsters hate me. From the first one I fished up to this fat bastard trying to break my foot in half. I tried to shake him off, but he wasn’t letting go. I tried kicking instead.

Marina giggled. “Wow. Flying lobsters, Daddy! I’ll go catch him for you.” She thrashed her arms, heading for the spot where the crustacean had splashed. In the shallow water, I could see it sinking to the sandy bottom.

My foot was a bloody mess again. It didn’t feel like anything was broken this time, but I walked gingerly to the cabin for the first aid kit. I didn’t want blood in the water, with Marina swimming in it. The sharks here grew huge and I was certain they wanted revenge for the one Vanessa and I killed on our first trip up to the islands. Okay, Vanessa killed it. I was just the bait.

Carrying the kit to the side, I scanned the water for Marina. She’s almost reached the spot above the sinking shadow – but the lobster wasn’t the only shadow in the water. And the other one was huge – maybe as big as the charter plane that was bringing my case of beer back with the new deckhands for the Dolphin.

A shipwreck, I told myself. A piece of that lost plane. A rock. But rocks didn’t move. It couldn’t be. I’d never seen a hammerhead that big.

“No, Marina! Watch out!” I cleared the side of the boat in one leap and the water was a cold slap, the salt stinging my foot. I ducked under a wave and swam for Marina. I had to save her from the shark. I couldn’t lose my daughter.

Screaming pierced the water as a body slammed mine against the side of the boat. I heard words that might have been whales or dolphins talking – I couldn’t understand them. My head broke the surface and I dragged a breath into my burning lungs, fighting to be free. Marina was nowhere to be seen. “NO!”

“Get back aboard. She wasn’t in danger until you jumped in the water with your bleeding foot.” Vanessa’s arms pulled me through the water, shoving me against the ladder. “Climb.”

My brain was numb. I couldn’t lose my daughter. I should swim back and tackle the shark. Make it let her go. Make it take me instead.

I was going to lose my breakfast, too. Yak it up on deck. Dizzy, I sank to the matting. I thought I heard Marina giggling, saying she wanted another ride up the channel with ham. No. I’d never hear that magical sound again.

My daughter. My responsibility. And I let her get eaten by some freak vengeful shark. What kind of father did that make me?

Soft footsteps on the deck behind me couldn’t drag me out of despair.

Small, dripping arms crept around me, trying to still my shuddering. “Don’t worry, Daddy. I’ll protect you. I promised Mummy I wouldn’t play with Ham again if you’re afraid of sharks. I won’t let them hurt you,” Marina said.